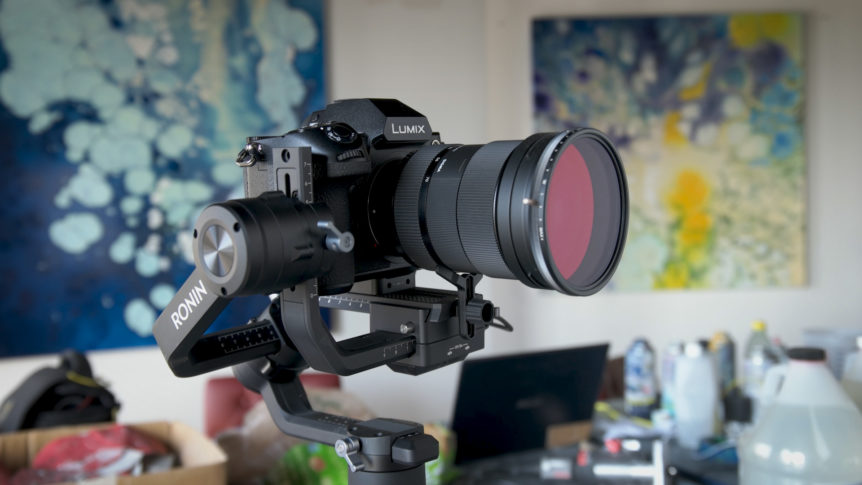 I’ve blogged a few times about how nicely the full-frame Lumix S1H works into my Panasonic AU-EVA1 package with its very closely matching specs, color science, and look. Having a V-log, 14+ stops, 10 bit, 422, mirrorless DSLR as a second camera can have far more powerful ramifications then just being a good B-camera option on set, which is certainly part of its intended use. However, for me the most powerful setup will be when I combine the S1H with the DJI Ronin-S. For so much of what I do there is often an interview and then B-roll. Where the EVA1 shines in the interview portion, the S1H shines in B-roll acquisition. The two packages together make for some powerful film making tools. Not only can I provide my clients with a valuable second camera angle for the interview, but then go in mobile mode to deliver dynamic movement for the B-roll without giving up the same image quality obtained in the A-roll interview. 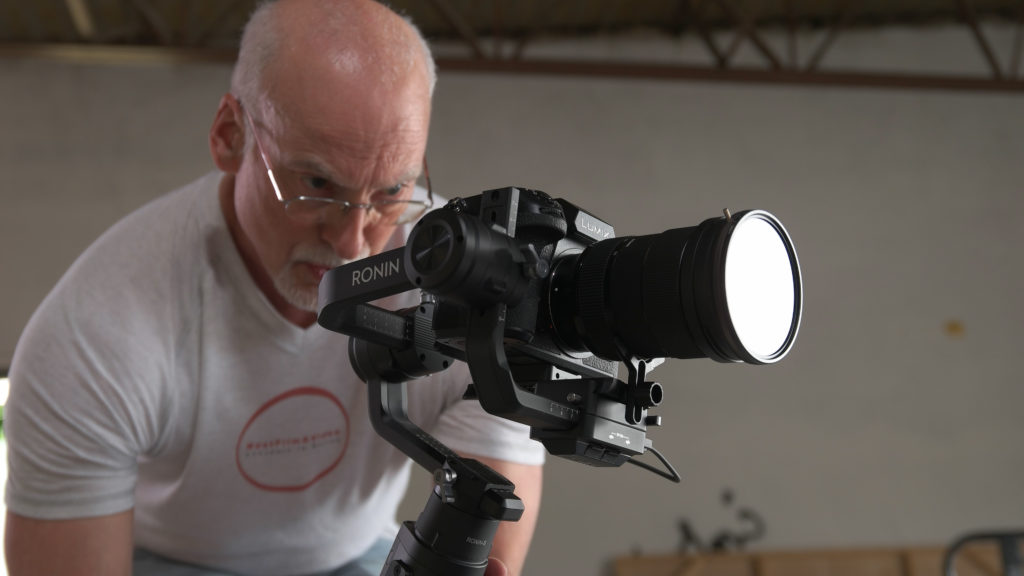 Me with the Lumix S1H/Ronin-S setup

Since we’ve all been shut down during the Covid-19 pandemic, it has afforded me the opportunity to really get to know the S1H, especially mounted to the Ronin-S. It’s quite a bit different experience than using my Ikan EC1 Beholder and Samsung NX1 combo. There are so many more movement options with the Ronin-S like Sports Mode, for rapid movement, and the handy front trigger for Lock Mode, that instantly allows me to keep the camera pointed in the right direction when I make a boom move, for instance. But the S1H/Ronin-S combo comes at a heavy price, literally! This setup can be quite fatiguing in a very short time. The S1H is heavy for a mirrorless DSLR in the first place, and adding the Sigma 24-70mm adds to it a little more so than what a prime might. It balances well on the Ronin-S and the motors handle the load but operation is another matter. 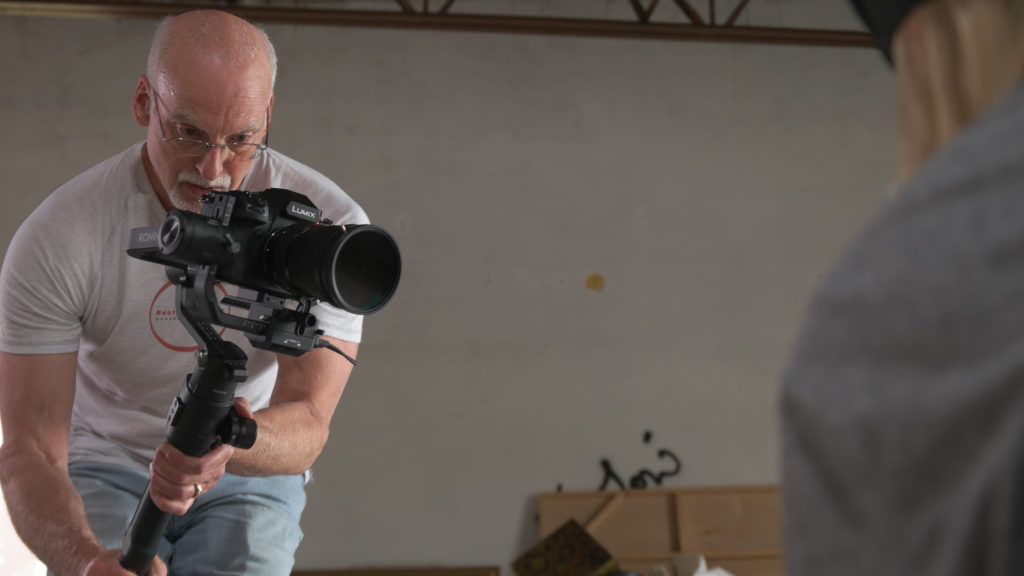 Hand positions on the Ronin-S

Thankfully, the Ronin-S has the built-in stand that collapses to become a handle, but the focus wheel dictates where your hands have to be to operate. So my left hand has to be high on the handle with my thumb on the focus wheel while my right hand finds the ideal point somewhere lower, perhaps down to the collapsed handle depending on the camera height and move involved. Extending the camera forward in Flashlight Mode is where I really feel the weight and in a matter of just a few minutes I found my arms trembling a bit. Upright Mode camera positions are much easier to hold for longer periods, but still heavier than most setups would be.

There is no better way to test a system than shooting something and figuring out best practices along the way. I asked a very talented shooter friend, Kyle Spradley of Golden Pictures, to join me on a shoot with artist, Toni Martin of Toni Martin Art. She makes, among other things, resin art, which is a process of infusing color into art-grade resin epoxy to produce some striking color reactions on the surface. Kyle was to use my old gimbal setup of the EC1 Beholder and Samsung NX1 camera with a 16-50mm electronic lens, while capturing me using the S1H/Ronin-S combo. The final video is intended to serve as a promo for my producer clients to salivate over for their next gig. 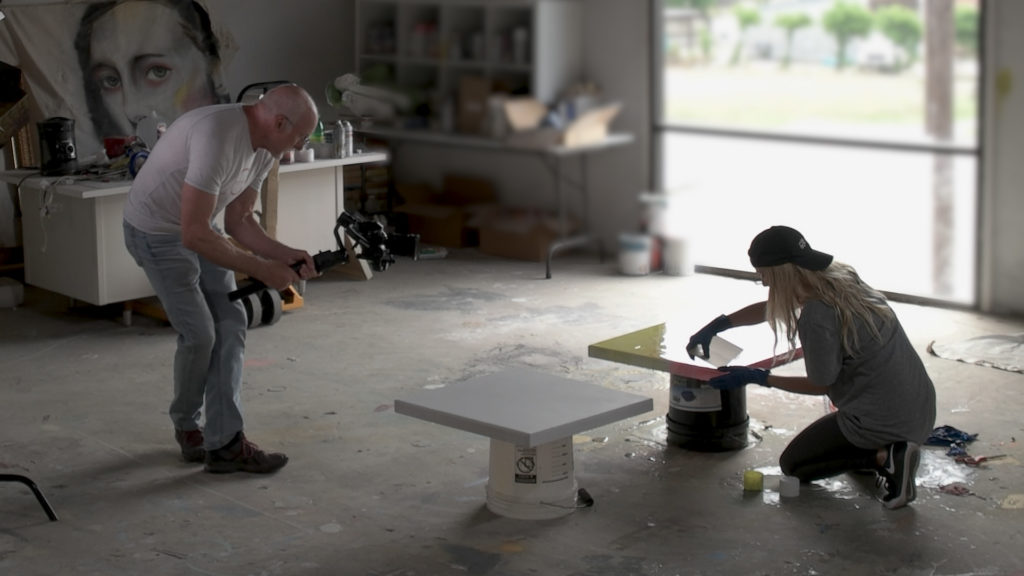 Because Toni does her thing low to the floor, Flashlight Mode quickly became my most used mode of operation. And because I had no idea exactly what she would do during the course of her creation, I found myself mostly chasing her actions both in composition and for focus. I was constantly adjusting the camera position and riding the focus wheel while keeping just far enough away from the liquid resin, all while trying to make a pleasing move. The best results came when I would simply initiate a move and stick with it, which were usually wider angles. 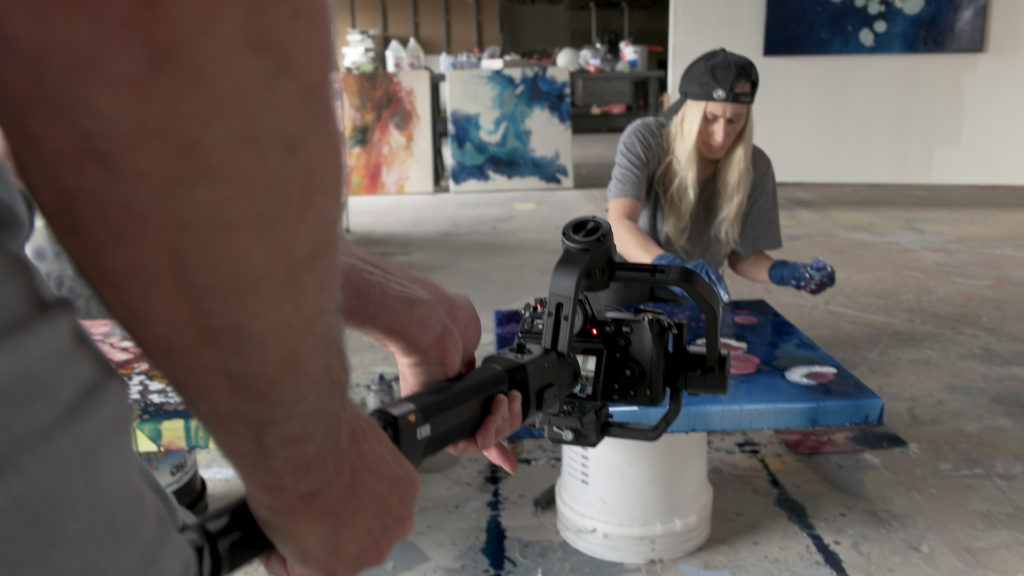 She has to work quickly before the resin sets up so we couldn’t stage anything or retake anything. It was the kind of shoot where you try to look for ways to create dynamic movement as it happens live. I realized I couldn’t expect spectacular results at every moment but knew I was hitting key movements at times and capturing enough variety of movement to tell an abbreviated story of her process. Another challenge was having confidence in the peaking tool within the S1H. Because the setup is already so heavy, adding a larger confidence monitor seemed out of the question. I wanted to know if I could trust the camera’s peaking in the small LCD screen, and for the most part, I could. But the focus wheel is quite lively on the Ronin-S in that it didn’t take much of a turn to adjust focus greatly. I had to be disciplined, glancing from the focus display readout while creating pleasing camera movements, and holding compositions of uncertain talent actions.

The whole shoot was a fabulous test in so many ways that it really help me understand the capabilities and limitations of the Lumix S1H/Ronin-S setup. The images were very pleasing to say the least, especially comparing them against the Samsung NX1. There was far more dynamic range, better color, more film-like images from the S1H. To be fair, I did de-saturate the Samsung footage in post to draw more attention the Lumix footage.  Here’s the link to the final video: https://vimeo.com/420440956