There is a ton of criticism of the darkness displayed in GoT episode, THE LONG NIGHT, hitting the internet after the epic showing this past Sunday. A lot of discussions about bit rates and compression and simply the lack of light to see many scenes. As a DP, but certainly not at the level of someone like Fabian Wagner, (who was the episode’s DP), I had some thoughts of my own that perhaps haven’t been considered, but maybe worth exploring in an artistic dialogue.

Along with so many of us GoT fans, I watched this epic episode unfold before my eyes with amazement and awe, as I don’t think I’ve ever experienced from a television production before. Like all of GoT they are making theater-level cinema revealed every week. However, unlike theater cinema, the conditions of how the product is displayed varies so widely from TV set to TV set. So few people get to see the episode the way the filmmakers can in their original uncompressed, perfectly tuned, professional grade, color accurate monitors. I watched it on my 2004 Samsung DLP 720p set, (far from the quality of my Samsung 4K HDR smart TV) (in a different location) yet I was still captivated by the story and enormity of the battle’s ebbs and flows. Yes, there were times I struggled to make out every image, and the HBO NOW stream struggled the most holding together in foggy scenes, like when the cloud of cold descended upon Winterfell. Certainly it was the challenged compression, and GoT has no more control over that than any other movie or show that we all suffer through with this data rate short-coming. I can’t wait to see this episode in perhaps 4K Blu-ray, and finally see what the filmmakers’ truly intended.

But going beyond the technical short-comings of digital delivery, I wanted to delve into the art of Wagner’s lighting itself. I read the Vanity Fair post talking about how GoT episode director , Miguel Sapochnik studied the epic battle in LORD OF THE RINGS: THE TWO TOWERS, which has a much higher night time key level than was used in THE LONG NIGHT, yet plays as night and all the cast members can be seen. What strikes me most in these two comparisons is the range of values differences. And to me this is simply an artistic choice. RINGS DP, Andrew Lesnie, and director, Peter Jackson, chose to use nearly the full range of light value (black to white) on their cinematic canvas. Whereas Wagner and Sapochnik chose a more limited use of value range. 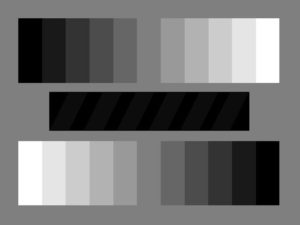 In fact, the only elements I can remember seeing anywhere near 100% light value in THE LONG NIGHT would be the fire, which was their intent to make a naturalistic, source-driven lighting scheme. In their palette, the fire has to be the brightest source, closest to 100% as they would ever want, and in fact, more like 85%-90% so that the fire would still have color detail. So everything else in their scheme would have to fall below that value on the scale. And in a realistic lighting scheme, the farther away the subject is from the source (fire) the lower the affected value would be. Makes sense, right? Stand close to fire and you get more of it on you, the brighter you appear. Farther away from it and less of it shows up. This lighting scheme struck me right away. When looking at the line of soldiers waiting to take on The Dead, their light sources were distant and thus edging them very faintly with warm light (2000K?). 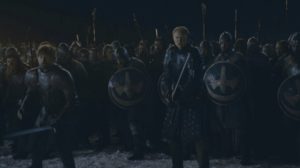 Cool moonlight was faintly overhead or edging the subjects on the opposite side. None of these edges were likely over 40%-50% in brightness value and likely even less than that at times. So consequently, using this sort of value scheme, the audience was watching most of the imagery below 50% of the potential value scale. And I’d estimate the front fill was probably buried in the 20% range at best. Audiences are just not used to seeing this type of lighting realism. It was clear to me Sapochnik was using the darkness to increase the tension of not knowing what was coming. We had seen The Dead before, and I think to great effect, Sapochnik deliberately wanted to make The Dead even more frightening by not seeing how close they were until it was too late. I certainly felt dread and doom that our favorite characters would not survive the night.

I’ve had occasion to light what was to appear to be complete darkness to the audience, but of course, our medium is not radio so there has to be some light some how. At the time, I was working with a camera that wasn’t very light sensitive (perhaps 400 ISO) given the settings, and I needed to carry the focus (maybe f4-f5.6) during a move following talent. Consequently, I had to use brighter source light than the actors were expecting. They commented it felt bright.

I suggested they look at the monitor and once they saw the proper exposure they were amazed how dark it felt. Their job was to act as though it were almost too dark to see anything. See the movie FREAKS

Certainly, if a DP can actually make a set dark for the sake of the performances and still achieve the desired images, everyone wins. Many of today’s cameras can do that pretty well now. Wagner based every artificial light’s intensity on the output level of fire for THE LONG NIGHT, which isn’t as much light as people think. And I’d wager he tried to minimize a lot of small units hidden everywhere that might get in the way of battle performances, if underfoot.

I’m anxious to read something on Wagner’s instrument choices for THE LONG NIGHT battlefield. I’m guessing he had a couple of space lights, one very warm, one moderately cool, dangling from cranes overhead on opposite sides of the massive set, and a large instrument bounced far off-screen for a very dim but evenly spread fill light. I saw American Cinematographer will feature GoT in July and perhaps he’ll reveal his approach there. Can’t wait!